I write prose for a living. I enjoy cooking, baking, and reading. I know that sounds awfully boring but I occasionally travel, which is always fun.

Photos and articles are mine, unless otherwise stated. Please don't use them without permission. I am very easy to talk to anyway. Just drop me a note if you need to use any part of this blog and wait for a written permission.

Thanks for dropping by.

[This has not been proofread yet. Please bear with me]

The trip was turning out great. We munched on some pastry bars and the free Moroccan trail mix I got from a souk in Marrakesh. I sang from time to time, and Elton either smiled or smirked, depending on his mood. We talked about travel, life, stupid people. That was fun, too, but time and again, we heard ourselves say, “Look!” or “Wow!” or “Oh my god!” or “That’s so beautiful!” The countryside was a tapestry sewn so intricately by nature, much more complex than the way the Berbers forge silver with wood to create one-of-a-kind trinkets, or how they use the Agave plant that grows abundant to make silk. Having the Atlas Mountain Range and its sub-ranges as a rich and vibrant backdrop was nature’s greatest gift to Moroccans, and Northern Africa, for that matter. If you look at the map, you’ll see that a part of the mountain range and the mountain’s sub-ranges are  in the middle of Morocco, which means that you will see and pass through and around them most of your journey if you explore the country by land.

Our itinerary for the day was Essaouira-Ait Benhaddou-Dades. According to Google Maps, it was going to be an eight and a half hour trip, excluding stops. The road to Ait Benhaddou was a showcase of nature’s beauty. I have never seen so many shades of bronze and copper in all my life. I bet the Pantone people will salivate. The traditional houses are a dark shade of terracotta. There are small communities in the middle of nowhere. Most of the time, only a few cars will pass by for miles and miles. I can’t remember how many times I asked Elton how people can live so far from markets and without any visible car to take them anywhere in case of emergency. Not only will you see houses built far from the street without any visible road leading to it (how the heck did they transport the materials to build it?), but there will be hitchhikers along the roads where not a lot of cars pass by. How in the world did they get there in the first place will be your first question. The second will be how they can reach their destination. Herds of sheep can be seen here and there, just strolling like rebels—who the heck needs shepherds, right? We saw a herd of goats almost defying gravity, strutting on a face of what seemed like a plateau (I need to review land forms, I guess). But goats! Are you friggin’ kidding me? I refused to believe they were goats so Elton pulled over to make me look closer. They were indeed goats, almost camouflaged by dirt, except for the black ones.

I also saw a lot of RVs in Morocco. Most of them have European plates, according to Elton.

There are a lot of vans as well. Basically, vehicles we see in movies that people use for road tripping. I know that sounds very ignorant but I have yet to see vans and RVs like those in Asia. Elton said that RVs are great for travel in Morocco but not in Europe because in Europe, parking might be a problem. He also said traveling in an RV when it’s cold is hard `cause one would need to keep the heater on all night. He said he traveled in one when he was sixteen. I do pick up a lot of information from Elton, which I feel is worth sharing and can be useful for writers like myself.

We stopped to eat around two in the afternoon, had tagine beef and chicken with bread. In Morocco’s simple restaurants (their version of karinderya, a bit fancier than our simple ones), couscous is almost never served (surprise!). Rice is found here and there but the staple is bread, usually khobz or baguette. 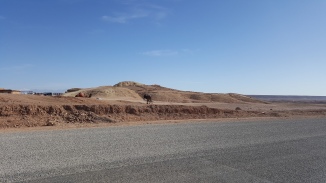 With stomachs full (Elton was having stomach problems but carried on anyway), we hit the road again. The sun was starting to set as we continued on Ouazazate (pronounced war-zazat). The view was absolute perfection, OH. MY. GOD. The sun painted everything copper, gold, and bronze. I was asking myself if it was real because everything in front of me was unbelievable. It was breathtaking. This will be the setting of a new fantasy book, I told myself. It seemed like at any given moment, someone would say “Cut!” because it looked like a movie set in its utter perfection. Surreal. Everywhere I looked, my eyes were filled with nature’s splendor, but they were hungry for more. Morocco only seemed too eager to show off.

It was past five in the afternoon and our hotel In Dades was pre-booked (a few hours away), and we haven’t even reached Ait Benhaddou yet, where some scenes from movies and TV were shot. We decided to stay here for the night. There were a lot of inns anyway.

Ait Benhaddou is a UNESCO World Heritage Site. It is a ksar (a fortified village). The structure is beautiful and shows how the Berbers used to live. Now, only four families live here and tourism has invaded it. There are stores and inns. We saw a couple pulling their luggage up the ksar. It’s difficult and your luggage will be dirty by the time you get to your hotel. You can hire someone to carry your bags for you (for a fee). If you plan to get to the Sahara from here, there are tour agencies (some authentic Berbers) offering camel treks to the desert.

We didn’t spend a lot of time in the ksar. We needed to find a place to stay for the night so we searched for one. Along the way, we saw an inn that looked nice enough. The receptionist said the price per room was 50 euros. By this time I was already learning the art of Moroccan haggling so I told the receptionist that technically, we will only spend a few hours there since it was already seven in the evening, therefore, he might want to give us a discount. He agreed. From 50 euros, the price went down to 20 (P1,050.00). It came with free breakfast. Good deal.

We freshened up a bit and headed out to look for a place that served dinner. The road was very dark. Elton noticed that the stars seemed brighter and larger here than in Italy, where he’s from. I read this same observation in a book by an American author. I didn’t notice anything different, which made me think that foreigners in the Philippines probably think stargazing is “more fun in the Philippines.” I will let you know once I go to either Italy or America. Haha!

I didn’t like the idea of driving far away since it was very dark so when I saw a restaurant that looked lovely, I asked Elton if we can check it out. The place was called Kasbah Isfoula. They served a mix of Moroccan and European cuisine. Elton had steak in blue cheese gravy and wine; while I tried their pork Milanese and Coke Zero. I know, I’m so rock and roll and Elton is so sophisticated. He didn’t even order wine to be fancy. Haha! I need to be schooled in sophistication, I guess. I’m not a fan of wine, and I hope Elton doesn’t convert me into one `cause my friends will raise their brows at me if I ask for a glass of fine vintage as I eat my rice and chicken adobo. Elton knew I disliked blue cheese but he made me try his steak with blue cheese sauce. I suspected he wanted to prove a point and make me a blue cheese fanatic. He succeeded. Credit goes out to Kasbah Isfoula in making me see the light. The meal was delicious! And the plates? Gorgeous.

I wanted to buy their plates but they said they weren’t for sale. I said “please” and I guess the waiter got amused and returned as we were getting ready to leave to hand over a plate. Very, very nice people. I love this place. Next time, I will eat here again.

We went back to the hotel after a lovely dinner. By morning, we had our breakfast and headed to our next destination—the Sahara Desert, Erg Chebbi. But first, we must see Dades Gorges. Elton was very interested when I showed him the photos of the road with hairpin turns. Funny thing, we were already in Dades but we still weren’t aware we passed through the famous road until we stopped to look at the view. It looked exactly like it does in photos. That’s the thing about Morocco—you don’t need Photoshop!

It was around two in the afternoon. We saw a van with an Italian plate and Elton talked to the guy about the road condition headed up and was told that the guy had to turn back because a part of the road was closed due to snow, plus we will be behind schedule if we continued on this road to get to Merzouga and see Erg Chebbi. The Sahara, finally. I can hear Anggun singing in my head… “If your hope scatter like the dust across your track, I’ll be the moon that shines on your path… The sun may blind our eyes, I’ll pray the skies above… For snow to fall on the Sahara…”

Arriving in the kasbah in Merzouga, I never thought that it was so cold that it was not entirely impossible for snow to indeed fall on the Sahara! But I shall talk about that on my next entry.